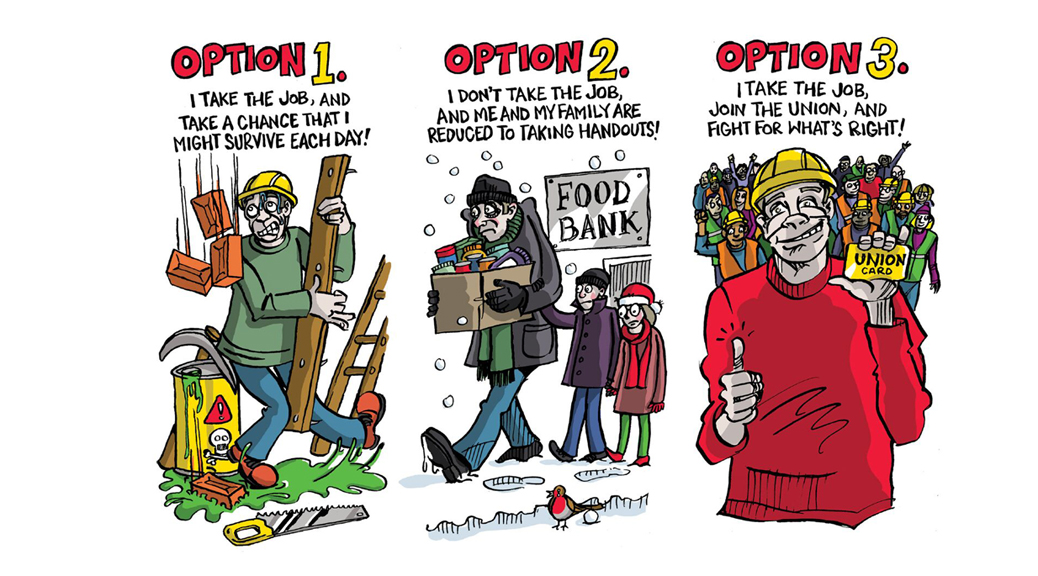 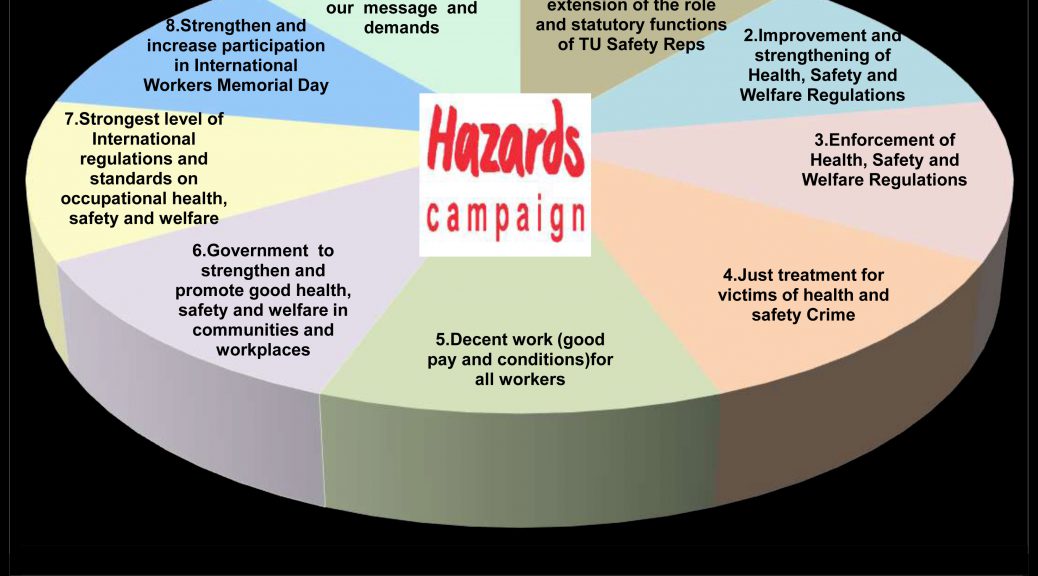 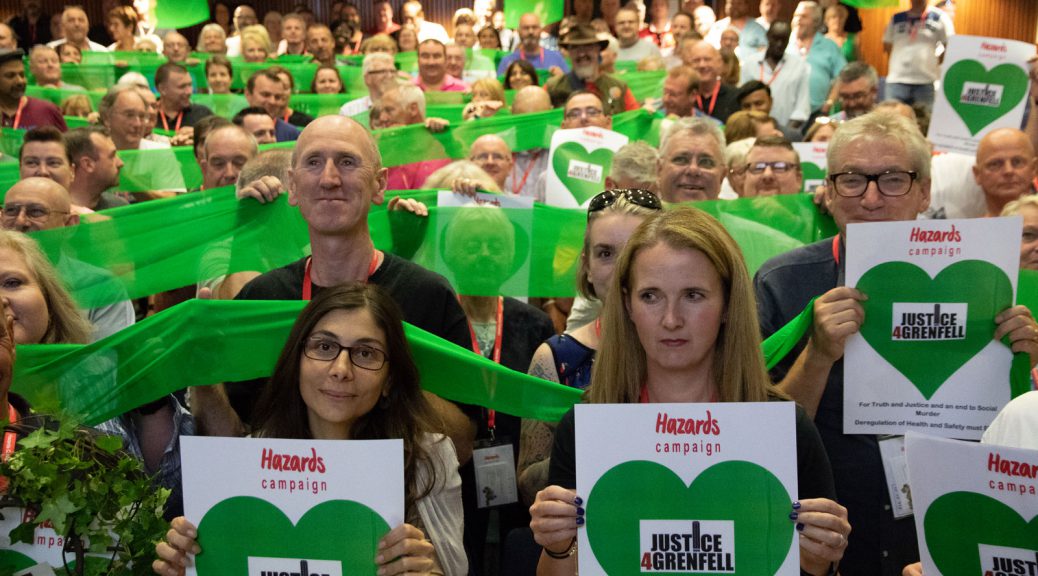 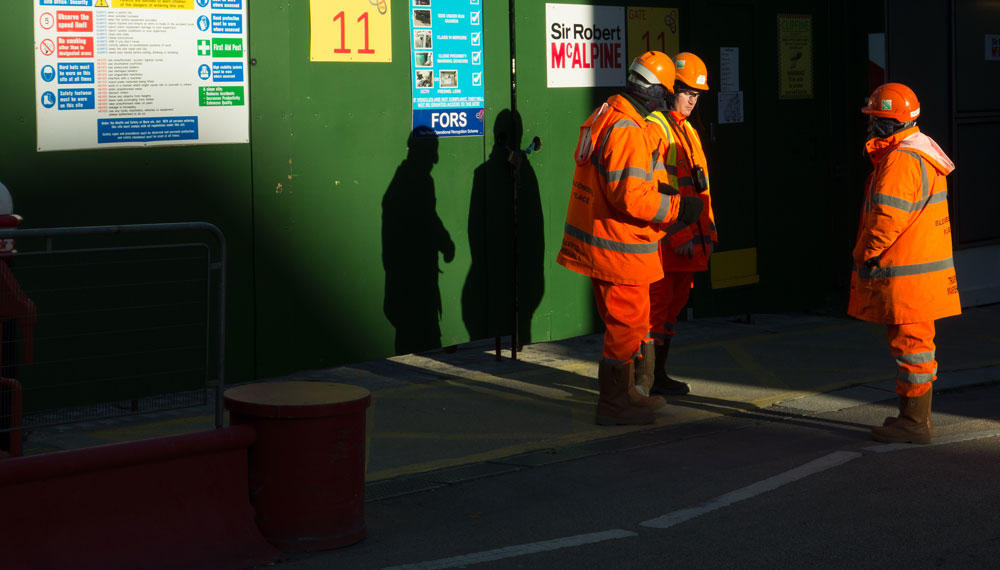 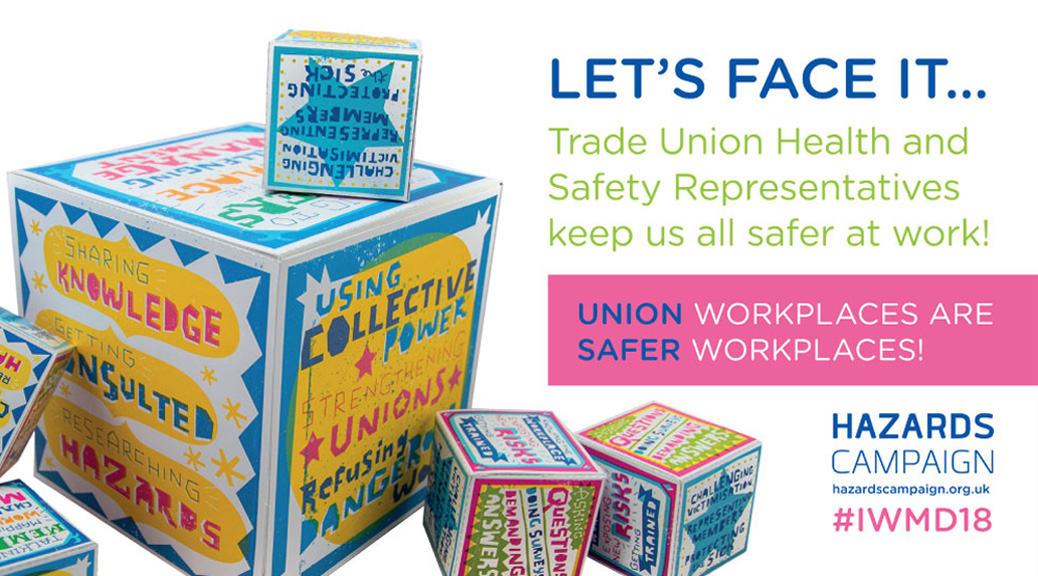 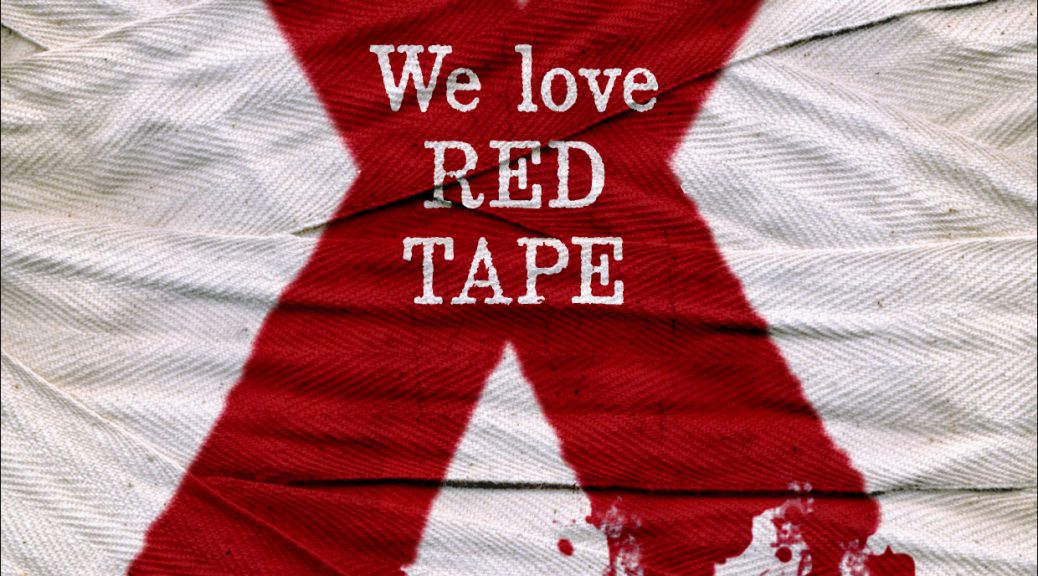 The Hazards Campaign has released an International Workers’ Memorial Day resources order form which includes, stickers ribbons and posters. You can download the form here.

The national Hazards Campaign is urging the Health and Safety Executive (HSE) to halve the workplace exposure limit for silica dust, a move it says will save 4,000 lives a year.

The campaign’s call came in response to a new ‘Choked’ report from Hazards magazine. This presents evidence for cutting the current legal limit of 0.1 mg/m3 for respirable crystalline silica to no more than 0.05 mg/m3, a move the report says would dramatically reduce the incidence of the lung scarring occupational disease silicosis, lung cancer, autoimmune diseases and other silica-related conditions.

Hazards reviewed the international scientific literature and internal HSE documents to calculate the annual excess silica-related death toll resulting from HSE’s repeat refusal to switch to and enforce the tighter standard, instead sticking with a level it admits comes with “significant risks”.

The report reveals that HSE’s own internal reports estimate the silicosis risk for workers is six times higher at the current HSE limit of 0.1 mg/m3, calculated at 30 cases per 100 workers exposed compared to just five per 100 at the tighter 0.05 mg/m3 standard. The United States and a number of other jurisdictions already work to the safer standard.

The Hazards Campaign is asking supporters to send an online postcard to Sarah Albon, the new chief executive of the HSE. Over 600,000 workers in the UK are regularly exposed to silica at work which is created when cutting, grinding drilling or polishing, natural substances such as rocks and sand and is a major constituent in bricks, tiles and concrete and materials. At least one-in-five workers in these jobs – and in some like stonemasonry and construction, possibly half – are exposed at or above the current deadly UK limit.

Choked! The evidence for introducing a lifesaving new silica dust exposure limit, Hazards, Number 147, September 2019.
ACTION: Send an e-postcard to HSE demanding it introduce a more protective silica standard no higher than 0.05mg/m³ and with a phased move to 0.025mg/m³.

The Hazards Campaign has signed this letter about the UK’s collapse of enforcement and checking on employers and  manufacturers.  We support Unchecked UK because we want the hard fought for and won protective laws intended to keep us safe  at work,  at home, in the environment and community, when eating drinking and breathing, and when using products and services, to be properly enforced.

The system intended to protect workers’ lives and health in the UK is essentially broken, workers are harmed daily, and those most at risk now have no reasonable prospect of enforcement of their basic human right to safe and healthy work. Employers cannot be trusted. UK Governments have slashed workers’ lifeline and left an increasing trail of injuries, ill-health and death from despair at the brutish working conditions employers provide when no-one is checking on them.

The system intended to protect workers’ lives and health in the UK is essentially broken. Workers are harmed daily, and those most at risk now have no reasonable prospect of enforcement of their basic human right to safe and healthy work.

Employers cannot be trusted to comply with even the most basic health and safety law.. UK Governments have slashed workers’ lifeline and left an increasing trail of injuries, ill-health and death from despair at the brutish working conditions employers provide when no-one is checking on them.

The 2019 National Hazards Conference, billed as the UK’s “biggest and best educational and organising event for trade union safety reps and activists”, will be held in Stoke-on-Trent from 26-28 July. The theme this year is ‘Cleaning up toxic work’ in increasingly insecure workplaces.

“When someone dies in a work-related incident, it’s not something that happened to a family. It is something that continues to happen. Not just for weeks or months. But for years…decades…maybe even generations.”

“Ensure the lessons to be learned from their deaths are taught over and over so that the greatest legacy of all can be built for this and future generations, a world of work that is safer and healthier: life-giving, not life-ending.”

The Hazards Campaign, in conjunction with Hazards Magazine, has produced two striking International Workers’ Memorial Day 2019 posters. They are available in A4 and A3 sizes from the Campaign. Posters are free but postage will need to be paid on larger orders.  Order here. They can viewed on the Hazards magazine website at higher resolution. Poster 1 and Poster 2

The  Hazards Conference is the UK’s biggest and best educational and organising event for trade union safety reps and activists.

The theme for this year’s conference is ‘Cleaning up toxic work.’ END_OF_DOCUMENT_TOKEN_TO_BE_REPLACED

The Hazards Campaign has produced a variety of Workers’ Memorial Day resources to support unions and activists with their 28 April event planning.

These include stickers, posters, purple ribbons and high-viz WMD jackets. See examples of the resources below.

ALSO: The Campaign has produced two new posters for #IWMD19. You can order them here – other resources can be ordered using this form

Other posters and resources As we begin organising for International Workers Memorial Day 2019, Greater Manchester Hazards Centre will be unveiling a memorial stained glass window on 23rd November at the People’s History Museum, Manchester, from 3pm to 5pm.

The window will be jointly  unveiled by Rebecca Long-Bailey, Shadow Secretary of State for Business, Energy and Industrial Strategy and founders of Families Against Corporate Killers, FACK,.

‘Fallen Tears’, and will be on permanent display in the Peoples History Museum, Left Bank, Spinningfields, Manchester M3 3ER