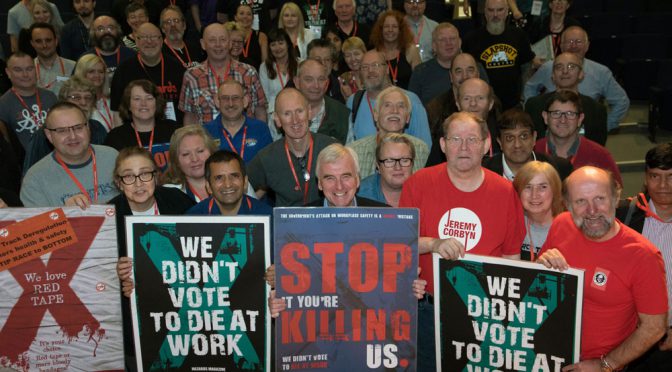 The Hazards conference is the largest conference in the northern hemisphere solely for Trade Union health and safety reps.  This year’s was called ‘Building Resistance to Support Safety Reps. It was a packed weekend with 350 delegates, fantastic speakers, valuable workshops and inspiring meetings.

Hazards 2016 started with the Friday plenary session. Hilda Palmer of the Hazards Campaign welcomed delegates, explained what the Hazards Campaign is, listed useful website links, outlined #Haz2016 theme, the new format programme and arrangements, gave thanks to sponsors, and noted that a third to half of delegates are new to Hazards. Delegates were asked to sign a ‘Stop it you’re killing us’ postcard included in their delegate bag, to send one by e-mail , share it on Twitter and Facebook, and take it back to workplaces and branches. The introduction ended with a minute silence to remember all those workers – over 50,000 – who  have died at, and by, work over the last year and especially Linda Whelan a founder member of FACK, Families Against Corporate Killers, and those killed in multi-fatality incidents such as the five migrant workers killed at Hawkeswood Metals, in Birmingham, the four killed at Bosley Wood Flour Mill,  and the four killed at Didcot power station, of whom three were still buried under the rubble.

Hugh Robertson, TUC Health and Safety officer, spoke about ‘Protecting health and safety after Brexit’  describing the potential implications of leaving the EU on workers safety and health, threats from new trade deals, what regulations are specifically at risk and the TUC’s campaign on protecting workers rights.

Aida Ponce Del from the European Trade Union Institute brought solidarity greetings and the message that ‘Despite Brexit ‘Occupational health and safety should REMAIN’.

Dr. Anne Raynal, an ex-HSE senior medical inspector described ‘HSE’s failure to enforce the duty to prevent occupational diseases’. Anne spoke about the lack of reporting from employers on workplace illness and the subsequent lack of prosecutions and enforcement. She said “On average there are only 1,600 disease notifications under RIDDOR per annum for the 516,000 new cases of work-related ill health that HSE estimate occurs every year, a staggeringly low 0.03% reported.  Consequently there is little action, prosecution or active prevention taking place to stop workers being made ill by work.”

Professor Steve Tombs from the Open University and Centre for Crime and Justice Studies, spoke about his recent research: ‘Better regulation’ Better for whom?  Steve  talked about ‘dismantling a system of regulation – social protection – which was put into place from the 1830s onwards’,  the privatisation of enforcement  and the restrictive ‘Growth duty’ placed on enforcers.  He detailed the reduction in the number of HSE and Local Authority inspections (fell by 69%, preventive inspection fell by 96% for Local Authority Environmental Health Officers, EHOs), prosecutions (fell by 35% for HSE and 60% for  L.A.  EHOs). Steve also raised concern about the Primary Authority Scheme which enables businesses across different local authorities to elect one authority to regulate all of its sites across all LAs. A copy of Steve’s briefing was provided in delegates’ bags and can also be found here.

Under the new format, there was no Saturday plenary, so delegates went straight from a hearty breakfast into a full-on programme of workshops, seminars and meetings that were broken down into three themes: 1. Workplace organisation, 2. Dealing with risks and 3. Employers offensive/Workplace tyranny.

Workshop 9 Finding out what harms us
Download the notes here

Meeting  3 UK and global threats to health and safety organisation

Ian Tasker of STUC spoke on Threats to health and safety in Scotland. He illustrated the higher rate of work harm than in England and Wales, the  need for devolution of enforcement and regulation of health and safety; the Smith Commission, the Action Plan for Scotland and he linked workplace deaths, injuries and illnesses with austerity and poverty.

Hugh also made the excellent point that the HSE boasts of GB having the ‘best health and safety in the world’ with low fatality and injury figures is only because our manufacturing is outsourced to  Asia where making those same goods probably causes more deaths,  injuries and ill-health now than when they were made in this country.

Omana George, Director of Asia Monitor Resource Centre, AMRC,  spoke about the huge health and safety risk facing workers in almost all sectors  in Asia – now the workshop of the world – and especially affecting informal, unorganised workers. She described the work of AMRC and of ANROEV, the Asian Network for the Rights of Occupational and Environmental Victims. She described how about ten years ago they began to focus more on occupational ill health thinking the worst  disasters of factory fires were over… But then they started happening all over again. Omana George AMRC

One of the six campaign meetings to end the day was run by Sarah Wiktorski from the ‘Better than Zero’ campaign. It was very inspiring describing  their work in Scotland with trade unions and the Scottish TUC. the actions were led by young people who used challenging and innovative activities against zero hours contracts and working practices which include having to pay multi millionaire restaurant owners a percentage of their earnings. (See YouTube clip below).

Another inspiring campaign meeting was run by Barry Faulkner of UNITE on the health and safety problems experienced by vulnerable workers at the Shirebrook depot of Sports Direct . He described how those workers fought back with the aid of union and community groups .

Asbestos update: JUAC papers here https://www.teachers.org.uk/help-and-advice/health-and-safety in our health and safety A to Z, under ‘A’.  The 2nd and 3rd are all about the impact of academisation or attached

The final plenary on Sunday started with Sarah Wiktorski on the  ‘Better than Zero’ campaign and was followed by David Hardman, UCU, who along with colleague Mark Campbell was victimised then sacked from London Metropolitan University. David for his activities on stress as a safety rep.

Sanjiv Pandita, ex Director of AMRC and now working with the Hazards Magazine and Campaign and activists round the world to set up a Global Occupational Safety and Health, GOSH, network to combat the global threats to our lives and health. Sanjiv talked about the huge manufacturing companies employing 50-80 thousand workers in enormous hangars who make our phones and trainers. He showed pictures of the slums they are forced to live in because of the poverty wages they are paid, reminiscent of the UK Victorian slums during the industrial revolution. Sanjiv reminded us of the way global capitalism pits us against each other,  and exports hazards and ill health to other workers to make the products we buy and use and why we must work together globally to fight back, hence the need for GOSH.  He talked about the lack of accurate reporting of deaths, injuries and illness caused by work in Asia, which means that India’s high work death rate appears, theoretically, comparable to that of Denmark! He showed a rough recalculation, using Hazards Magazine/Campaign estimates,  that pointed to the the death toll in Asia being at least 4 million workers per year! PowerPoint presentation

We also heard from Blacklisting Support Group campaigner Royston Bentham on their great achievements and what must be done next. Royston praised and thanked John McDonnell for all the support he and Jeremy Corbyn have given the blacklisted workers and how they have fought alongside them every step on the way through Scottish enquiries and court cases. See the Hazards magazine feature Victory!

Dave Smith’s updated book, Blacklisted: The secret war between big business and union activists, is now on sale from the New Internationalist.

The Hazards Campaign demands  were read out and  voted upon before John McDonnell, shadow chancellor got up to speak and told us we would  have all of those and  more.

John McDonnell met his promise to speak to the conference, made months ago in less hectic times, and came early and stayed late, talking time to talk knowledgeably to delegates about their specific issues. As John had been criticised for not doing anything for workers, the irony of his commitment was not lost on the delegates.  John’s speech promised that health and safety and trade union rights would be at the top of the agenda of the Labour opposition and any future government led by Jeremy Corbyn.  he accepted our demands, added to them and invited us to send him a paper which he promised to put to the shadow cabinet for debate.

There were many highlights from the conference, plenty of networking and sharing of information including: the reps that talked about the lack of welfare-toilet facilities available to them because they were drivers or weren’t being released to be able to take toilet breaks; the terrible slum conditions people are working in in Asia who make phones and trainers; the lack of protection and enforcement for UK workers, and finally the inspirational speech by John McDonnell who offered the support of the Labour Party to Health and Safety reps and the Hazards Campaign.

We were reminded again to send a postcard to Theresa May to put pressure on the new Prime Minister to support and not erode health and safety legislation. http://www.hazardscampaign.org.uk/postcard